We study energetic materials, i.e. those that release heat upon decomposition.  Our focus is usually a practice problem:  making a material safer; understanding its formation or decomposition; improving its performance.  With that wide an area of study we require lots of instruments to address the various questions.  If you refer to the EQUIPMENT page, you will find calorimeters; mass spectrometers; and various spectrophotometers.  Depending on the question, some or all of these instruments will be employed.

Mass Spectrometry (MS) is an indispensable tool in a lot of chemical applications when it comes to detection and identification of various compounds. It ranges from traditional small molecule research to newly emerging fields of proteomics and metabolomics. Forensic science had greatly benefited from the use of Gas Chromatography/mass spectrometry (GC-MS) applications throughout its history, mainly from predictability of the breakdown patterns and capability of matching unknown spectra to the existing library database. Our group has historically relied on identification and quantification of energetic materials using GC-MS, so as many others in this field, and justifiably so. Below are just few examples out of numerous research topics, in which this technique was essential in detecting, identifying and quantifying various explosive compounds that we have investigated in the past:

Gas chromatography is very versatile technique featuring a lot of detection options, and extremely beneficial for identification of volatile and semi-volatile compounds. However, the biggest drawback for analysis of explosive materials and other thermally-labile compounds comes from GC’s inherent design and functionality. If the compound is thermally unstable, then a great care must be undertaken for its detection. Additionally, many organic compounds are very polar in nature and cannot be naturally observed on most GC columns that are designed for non-polar and semi-polar molecules. The derivatization of such compounds is feasible, but opens the possibility of questioning the legitimacy of observed species, especially in forensic applications. Finally, some compounds have such low vapor pressure or high melting points that they are not suitable for GC analysis.

Recent advances in Liquid Chromatography helped it to gain serious footprint in various research applications, to such an extent that it is almost an exclusive technique employed by many industrial (pharmaceutical, bio-engineering, biological, etc.) and academic laboratories for compounds’ structural elucidation, detection and quantification. It gained its popularity due to many factors, some of which include: minimization of run times (ultra-high performance liquid chromatography), increased robustness and versatility, ability to analyze polar compounds without pre-treatment, ability to analyze large protein and metabolite molecules. When coupled to mass spectrometry, this tandem technique offers additional range of versatility, extending to accurate mass detection (Thermo Scientific Orbitrap Mass Spectrometer), and allowing us to greatly improve our abilities to predict what happens, on the molecular level in the gas phase, to the compounds we are trying to investigate.

The power of accurate mass detection, using Orbitrap technology, helped us to understand fundamental properties of numerous chemical families and uncovered ion suppression phenomenon for a very common acetonitrile solvent. This discovery not only helped us to lower the detection limits for peroxide-based, ketone- and aldehyde-containing explosives, but gave other scientists a perspective on whether they should avoid the use acetonitrile for some of their applications: 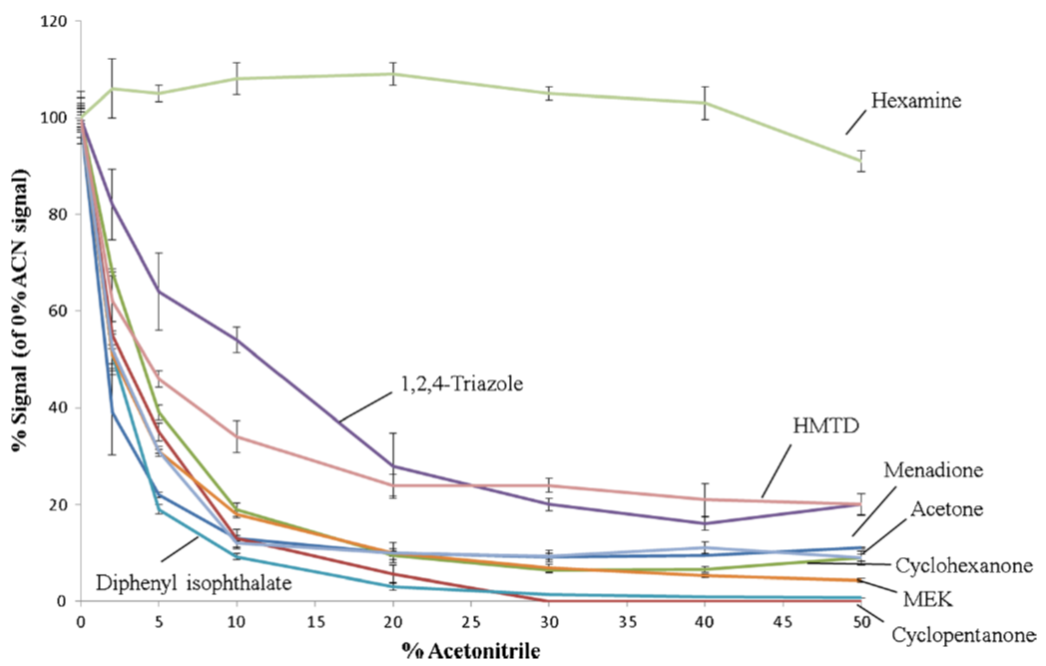 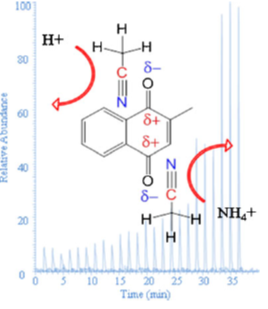 We investigate how energetic materials react in the gas phase, discover new properties and suggest novel research pathways, and sometimes disproving already established phenomena. We are interested in all energetic and forensic applications and cover them extensively using our array of high-end mass spectrometers. Each one of them is equipped with its own UHPLC pump, and an orthogonal UV detection is also available.

One of the biggest problems and concerns that the field of energetic materials faces, is how to predict whether the material will be detonable at lower amounts (below its critical diameter). Many research efforts were directed at finding a reliable method that can give affirmative results, ranging anywhere from molecular modeling to the large scale detonation testing. We proposed to use Energy Resolved Mass Spectrometry (ERMS) to probe chemical properties on the molecular level, and to correlate this data to sensitivity experiments on the larger scale. A statistical model was constructed to analyze raw data that represents completely intact (at 0 eV) to completely fragmented ion (at 50 eV) – Figure 1. As model constructed and fitted, we are gathering some valuable information on how sensitive and how stable this ion is, compared to other compounds. Additionally, we designated the data point at 50 % breakdown as a quick metric for cross comparison, coining the term fragmentation resilience or FR 50, thus the method’s name. This project is becoming more evolved as we gather and analyze more data for explosive and inert compounds:

Barium Azide is a useful redox partner for rubidium species found in chip-scale atomic clocks (CSACs).  However, the explosive nature of traditional barium azide synthesis and the potential for residual alkali contamination render straightforward metathesis an undesirable synthetic route. Our group has developed an approach that has so far proved to be less dangerous and yields high quality inorganic azides.  Further research to ensure the safety of the method as well as its applicability to most inorganic azides is being studied.

Sorbitol and Mannitol Hexanitrate (SHN and MHN, respectively) are six-carbon diastereomeric nitrate esters that can be produced from the nitration of readily available sugars.  During the course of our studies, a previously unreported polymorph of SHN was found and characterized using NMR and Raman spectroscopy, LC-MS, SEM, XRD, and differential scanning calorimetry (DSC).  Ultimately, we will study the decomposition and performance of these nitrate esters.  Theoreticians at Hebrew and Ben Gurion Universities will support these studies.

Neutralization of Dangerous Biological Agents, such as Bacillus anthracis (anthrax) spores, is the target of our research to develop biocidal pyrotechnic formulations.  High temperatures and the halogens are known to have anti-biological activity; thus, we are designing pyrotechnic formulations that possess these features.  The pyrotechnic foams are characterized using Parr bomb calorimetry and UV/Vis spectroscopy to quantify heat and halogen production.  Rheological testing will be used to assess the structural support provided by the foam matrix.

Metal-Organic Frameworks (MOFs) are a relatively new class of highly porous materials that have found use in several fields including gas adsorption and catalysis.  They are highly structured networks that feature metals or metal cluster nodes connected by various organic linkers.  Various MOFs are being studied, particularly zirconium based MOFs, for use as a possible media for the catalytic destruction of chemical warfare agents as well as explosive trace vapor adsorption.   Study of MOFs usually involves XRD, thermogravimetric analysis (TGA), and Brunauer-Emmett-Teller (BET) analysis of porosity and surface area. Recently, a new method of MOF synthesis was verified using XRD.

High-Nitrogen Containing Materials have gained interest in the past few decades due to their insensitivity and comparable performance relative to traditional explosives.  Colleagues at Bar-Ilan University have adapted a computer program from the world of finance to the world of chemistry.  This program has generated hundreds of thousands of nitro compounds, some of which are predicted to have very high detonation velocities and some of which might be sufficiently stable to actually exist.  We are screening the list of compounds for those for which we believe a synthetic route can be found.

We often take a problem through research development to its practical applications.  We supply one small company with the chemicals for colorimetric explosive detection kits; we supply another with safe-scent canine training aids for bomb-sniffing dogs.  Such applications usually involve working with polymer and other materials; therefore, you will also find under the EQUIPMENT page a particle size analyzer; a rheometer; a surface area and porosimeter (BET), a hot-stage microscope, and an atomic force microscope; and under INDUSTRY PARTNERS a large number of companies that we currently collaborate with.

As part of our work with the Department of Homeland Security we are involved in explosive detection.  You will find we have a rather thorough TSA lab with X-ray, CT, IMS, and handheld Raman instrumentation.

One class of energetic materials is explosives.  Working with explosives often requires that we attempt to detonate them.  For that purpose we have a firing-range about 30 minutes northwest of the main URI campus (ALTON-JONES).  The instrumentation required there is very different from that used in laboratory analysis.  Here we use pressure transducers to measure blast, high-speed cameras to observe explosions, and PDV to measure detonation or burn velocity.

Because we work on diverse projects we often must build our own devices or holders or other widgets.  To that end in the main lab are several 3-D plastic and one metal printer.  Both the main lab and the firing site have lathes, cutters and other machining tools.

Overwhelming?  Yes!  But no one does it all.  Each person finds his/her niche and area of interest.